This is a list of bat species found in Iowa. The data has been copied (with permission) from the Iowa DNR publication "A Guide to the Bats of Iowa" which can be procured from the DNR. This publication was authored by Christyna M. Laubach, John Bowles and Rene Laubach. The data is the property of the Iowa DNR Wildlife Diversity Program.

I want to thank the Iowa DNR for publishing brochures like this and allowing me to add this data to my website.

As members of the Order Chiroptera / bats comprise the second largest mammalian order. Because they play interesting and often unique roles in the natural world, bats come in many sizes and colors, including red, yellow, and white, as well as various shades of black and brown. Although all bats can see, some have much larger eyes than others. Some have interesting facial adornments while others are rather plain looking. A few have disproportionately large ears and others rather small ones. There is even a variation in time when bats feed. Although most bats are active after dark, many of the large tropical fruit-eating bats feed during the daylight hours.

It is in the pursuit of night-flying insects that one of the most interesting adaptive features of bats is best developed. Bats can echolocate flying prey by emitting vocal sounds from the larynx and mouth that are usually, but not exclusively, in the ultrasonic range (up to 180 kHZ). These sound waves strike the prey and return as echoes (sonar waves) that are funneled by the ears into a specialized portion of the brain. So specialized is this mechanism that bats can even compensate for rapidly changing distances and angles as they approach their prey. Excellent summaries of how bats use their sonar systems are provided by Fenton (1983) and Tuttle (1988).

Insect-feeding bats can often be seen foraging in twilight hours along streams and forest edges or in town under street lights. The foraging flight is erratic since bats dive after the insects, catching them with their mouths, wing tips or tail membranes. Insects too large to be handled in flight may be taken to a night roost to be eaten. Since bats prefer juicier insect parts, legs and wings usually are discarded.

When not foraging, bats utilize a variety of roosts. Some species have alternate day and night retreats, the former being the more secluded. Although Iowa's bats generally use natural roosts (e. g., loose tree bark, caves, tree cavities and foliage), some, especially the big and little brown bats, also utilize buildings or other man-made structures. In most North American species, males generally do not roost with the females and young.

When evening approaches, roosting bats become restless and often are noisy prior to departure. If their roosting shelter is large, the bats may even fly about before emerging. Upon departure, they frequently go first to water and drink by skimming the surface and scooping water with their lower jaws. Bats may then feed for more than two hours before returning to their roosts.

For many species, there is a second shorter feeding period just before dawn; but by daylight, or shortly thereafter, all bats have returned to their day retreats. Females usually modify this pattern when their young are born since nursing mothers must spend more time with their offspring.

When a bat lands in the roost, it banks slightly then catches hold with its hind feet. This maneuver, which resembles a cartwheel, puts it in the characteristic upside-down roosting position. While such a position may aid in detection of predators, the primary advantage seems to be in facilitating take-off. The bat simply releases its hind feet, spreads its wings and becomes airborne. However, many species can crawl with their wrists and hind feet along flat surfaces to jump-off points for flight or can simply flip into the air using both wings and legs.

Fall is a time for migration for most North American bats. During this time, large numbers of bats may be flying in and around caves, mines or similar cavernous structures. This phenomenon (swarming) may be associated with reproduction since mating occurs in many species during this time of year.

Although fall migration may commence as early as late July, by August most bats are "moving," and may seek temporary refuge in or on buildings enroute to their places of hibernation. At this time, many bats store fat used in both migration and hibernation. Additional fat deposition, however, may occur after arrival at the wintering site (hibernaculum). In Iowa, four species-little brown myotis, northern myotis, eastern pipistrelle, and big brown bat-commonly hibernate in caves, and mines in eastern counties. A fifth species (Indiana myotis) has been found hibernating in only two places in Dubuque County. Other bats migrate southward. The only species known to overwinter in buildings in Iowa is the big brown bat. During hibernation, the bat's depressed body temperatures reduce metabolism and fat utilization. If hibernating bats are disturbed or aroused, their metabolism increases, depleting fat reserves and diminishing their chances of surviving the winter.

While most mating activity occurs prior to hibernation, some takes place during winter arousal periods when there are prolonged spells of warm weather. In many bats, sperm cells are retained in the female's uterus until spring when ovulation and fertilization occurs. Gestation is about 50-60 days, with most young being born between late May and late June, soon after females have returned to their summer roosts. Colonial species form nurseries of 50 to 1,000 or more individuals in a variety of locations, including tree hollows, under loose tree bark, and in buildings. Females of solitary species roost in tree foliage.

While most bats produce one or two young per year, the red and hoary bats regularly have three or four. When birthing, the female turns right-side up as the young is born, receiving the baby in a pouch formed by the tail membrane. Naked and with closed eyes, the young bat resembles a miniature adult. In colonial species, the young (normally left in the roost when the mothers forage) form small clusters. Returning mothers recognize their own young by their own distinct odor and/ or sound.

Young bats grow rapidly and are able to fly in about three weeks when they are approximately three-fourths grown. In Iowa, this usually is in late June to mid-July. After the young are weaned, the nursery colony disperses. Hence, by late July or early August most young of the year, having left the nurseries, frequent temporary roosts elsewhere.

A variety of ectoparasites have been found in fur, in ears, and on the wing and tail membranes of bats.

Several kinds of bed bugs, fleas, mites, chiggers and lice have been taken from bats in Iowa, especially colonial species. Since such ectoparasites are host specific in their feeding habits, there is no danger of human infestation by bat parasites. For further information about bat parasites, consult Fenton (1983) and Tuttle (1988).

For their small size, bats are surprisingly long lived.

This longevity, however, is a necessity for species survival given the generally low reproductive rate of one or two young per year for most species. While data are too scarce for age estimates of non-colonial species (i. e., silver-haired, red and hoary bats), the following longevity records exist for those that are colonial: little brown myotis - 33 or 34 years in other states, northern myotis -18.5, Indiana myotis - 13.8, eastern pipistrelle - 14.8, and big brown bat -19.0. The oldest individual known from Iowa was a pregnant female little brown myotis caught at the Manchester Fish Hatchery 23 years after it had been banded (Bowles 1983)!

Among the mammals, bats are the only true fliers; although other animals, capable only of gliding, have common names that erroneously infer flying ability (e.g., flying squirrel). The bat's wing is built on the same general forelimb pattern as those of other mammals: upper arm, forearm, wrist and hand with a thumb and four fingers (Figure I, page 7). The fingers, however, are elongated and, along with the wrist, serve to support and manipulate the thin double-layered extension of wing skin, acting like umbrella ribs. There is no flesh between the layers and only a small amount of connective tissue with imbedded blood vessels and nerves. The thumb, free of the membrane, is short with a sharply-hooked claw for grooming and clinging. The hind toes are also clawed and aid in roosting.

Aside from minor modifications, the skeleton is similar to that of other mammals. The typically mammalian skull has dental modifications that reflect specific feeding habits (Figure 2, page 7). There is some fusion of vertebral joints for rigidity, the ribs are flattened, and the breast bone (sternum) is keeled for attachment of the enlarged wing muscles that give the downward pull.

The knees are directed outward and backward because the legs are rotated to support the tail membrane. One of the ankle bones, the calcaneus, bears a long spur (calcar) that projects toward the tail and helps to support the tail membrane (Figure 3, page 7). The ears, though thin and erect, are similar to those of most mammals except for the presence of the well-developed tragus.

The tragus is a fleshy projection that arises from the inner base of the external ear and appears to aid in directing incoming echoes to the ear (Figure 4, page 7).

Most authorities believe that bats evolved from primitive tree-dwelling mammals that fed primarily on insects. The exact origin of bat flight, however, is difficult to trace since the oldest known fossil skeletons from the middle Eocene geological epoch (53-38 million years B.P.) are virtually identical to those of today. Modem bats are cosmopolitan in distribution, being absent only from the polar regions and some isolated volcanic islands. The vast majority of bats, however, occur in the tropics.

Currently, two major groups of bats are recognized within the order Chiroptera: Megachiroptera are the large fruit-eating bats of Eurasia, Africa, and Indonesia and Microchioptera which vary in diet and are nearly worldwide. It is in the latter group that echolocation is best evolved, especially in the insect eaters. At present, most authorities list 168 genera with 857 species of living bats. These are placed in 18 families, of which only two (Vespertilionidae and Molossidae) have been reported in Iowa.

The family Vespertilionidae is nearly world-wide in distribution with representatives found from the tree line in Alaska and Canada throughout most of the United States, Mexico and Central and South America. Of these, the genus Myotis is the most widespread, having a distribution roughly equivalent to that of the family. 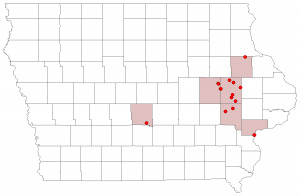 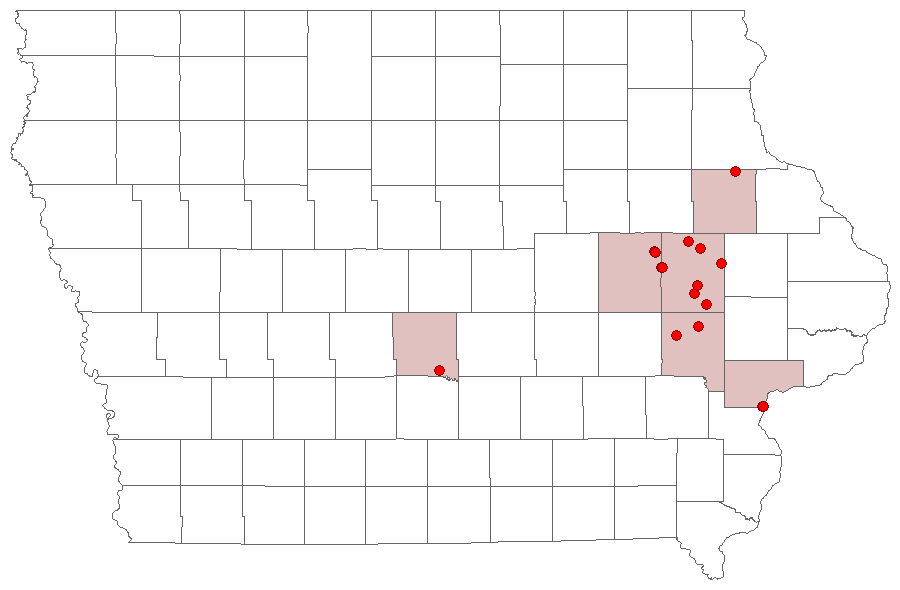 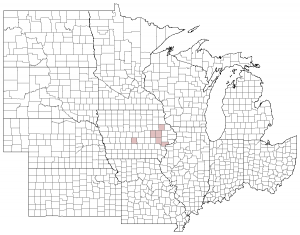 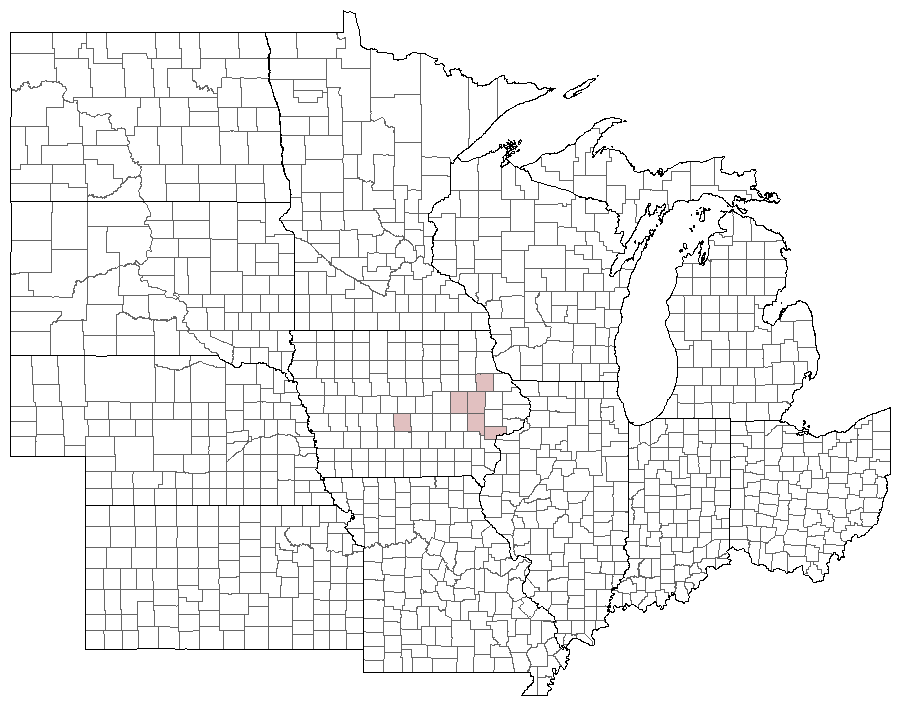 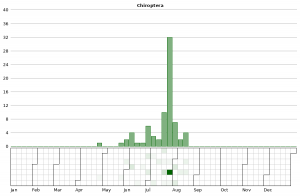 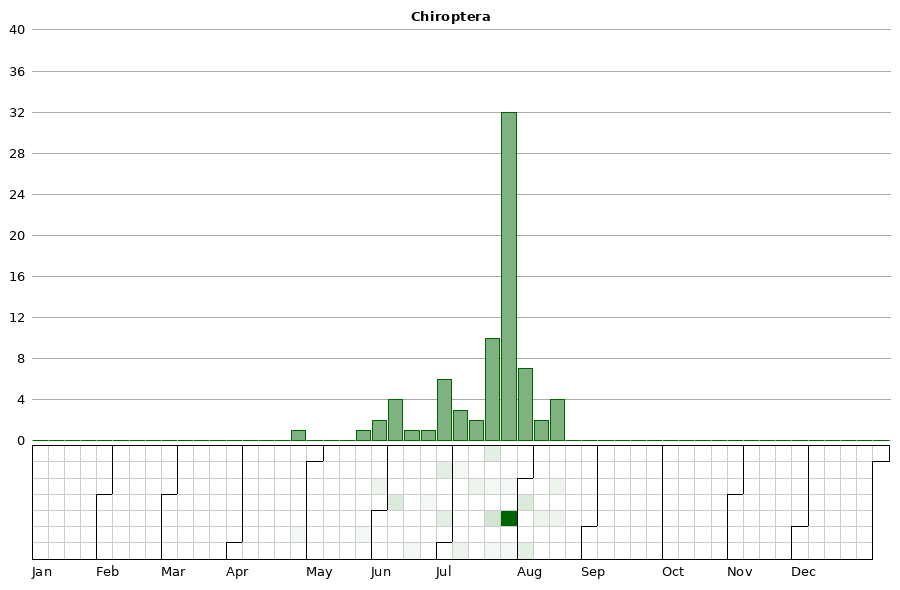 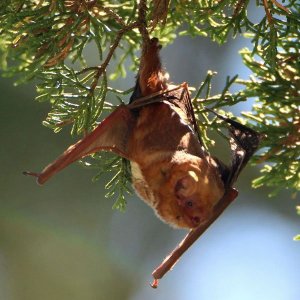